From the installer we know that Docker can save our bacon. Lets make an new container that includes the Garmin installation and have the proper dependencies necessary for running the simulator also. Don’t run this manually – we’ll make VSCode do this for us ;-)

Next we want to be able to use this image in VSCode so that we that run everything from there. For this we need the Remote Containers extension installed in VSCode

Next install the Garmin Monkey C extension is VSCode.

With the proper project setup these extensions will allow us to run VSCode within context of the docker image.

Start up that VSCode and use the Monkey C extension and create a new project. Then exit VSCode again. We need to configure the Remote Container extension

In the project directory, create a .devcontainer directory. Put the above Docker file in that directory. Next move/copy the Garmin installation to the directory also (docker won’t allow access to copy upper directory files into the container)

Copy the VSCode Remote Container configuration to the .devcontainer directory.

Finally we need a docker configuration for the container, that the Remote Container extension will utilize

Copy this to a Dockerfile into the .devcontainer directory also.

The final directory structure should look something like this

VSCode will then do a one-time build of the Docker image. After this, and hence forth, when opened in the project directory it will detect the .devcontainer directory and prompt if to reopen the project in the container. Accept this, and you are ready to go.

Starting the simulator and running the generated basic project 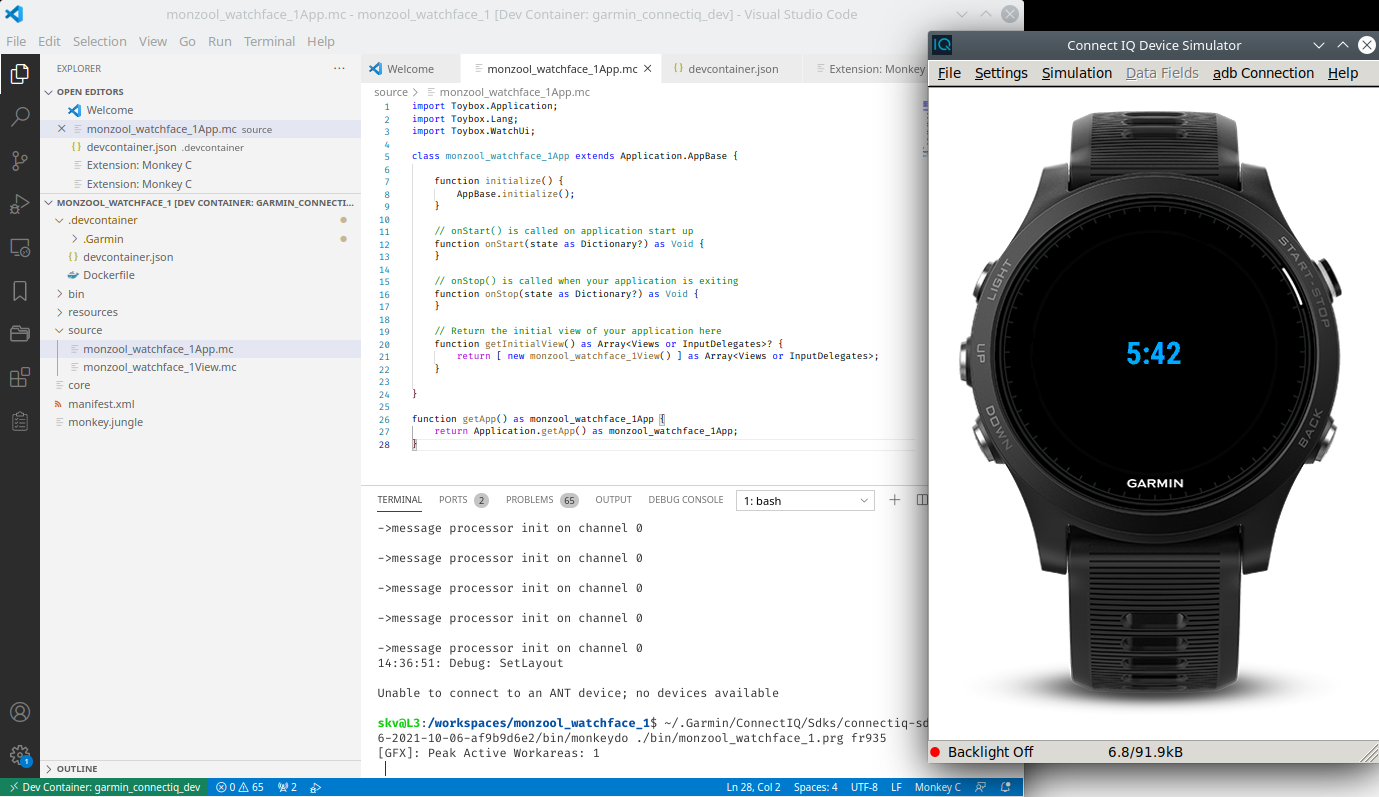 Don’t know if its the VSCode plugin that a bit brittle still (I believe the Eclipse plugin was the main focus by Garmin until recently), but sometimes I could not get the menus in VSCode to actually do something, so I had to fallback to run the commands directly in the VSCode terminal instead :-/

While google’ing “Connect IQ docker” I stumbled on the project kalemena/docker-connectiq. This looks far more complete than my quick and dirty hacks presented here. I haven’t tried the project (mainly to my loathe towards Eclipse), but I think you should consider it first

My encounters on doing web development

MY ENCOUNTERS ON doing web development, is a “small” writeup on the experiences and considerations I had when updating and re-writing a web-app used for a product at work. The web-app is an UI served Read more…

GARMIN HAS LINUX support for their developer SDK which is awesome! Unfortunately the installer for the Garmin Connect IQ SDK, is a GTK based application that utilizes an older version of libwebkit which is available Read more…